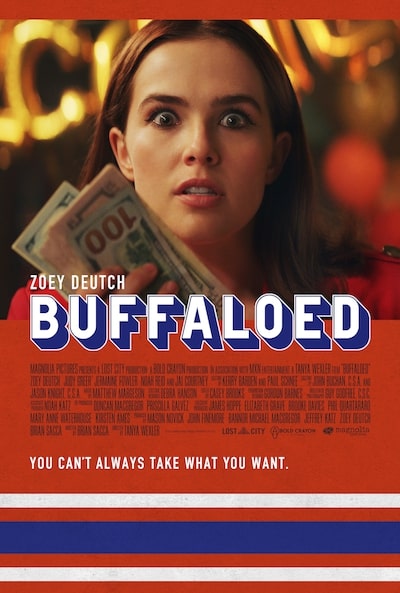 Showing on Sky Cinema UK and available to stream on other services.

I’ve been watching The Politician on Netflix recently and one of the star turns has been Zoey Deutch so scanning for a Friday night film I came across Deutch in Buffaloed.

Directed by Tanya Wexler it takes a look at the seemingly poorly policed world of debt collecting in the US and is told in the style of Wolf of Wall Street and The Big Short. Our story teller is young hustler with a dream Peg (Deutch) obsessed with making money from childhood, via an ivy league school and the world of finance, when events take a turn that ends that dream, she finds herself working in debt collection.

After seeing the seedier side of the business, she commits to “doing it right” which leads to animosity with rivals and a daily fight to make it work.

The story telling style is familiar for watchers of this genre as Peg breaks the 4th wall to address the audience with occasional explanations of the debt collection world. It’s not at the level of Wall Street or Big Short, but for me it was a pleasant surprise, its 90 minute run time keeps it bounding along and in Deutch you get a smart, energetic and fun performance that carries the film, she is well supported by Judy Greer and Jermaine Fowler, but this is a vehicle for Deutch and she does a good job of driving it along from start to finish.

If there is a criticism its short runtime means it never really digs to deeply into its subject or explores the miserable reality of its impact, but accepting that shortfall, it doesn’t distract from an entertaining 90 minutes and at least offering some exposure to a very seedy and poorly regulated industry.