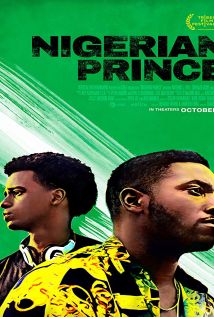 The second of a couple of enjoyable films from last weekend is Faraday Okoro’s Nigerian Prince. Starring Antonio J Bell and Chimaza Uche it follows Eze (Bell) who, after some local trouble, finds himself sent to his parents home land, Nigeria, to learn about who he is and where he’s from. He finds himself staying with his Auntie but soon realises Nigeria isn’t for him. He then meets his cousin Pius who is a full time scam artist, including playing his own part in the infamous Nigerian email wealth scams that lend the film its name and in Pius, Eze sees his ticket home.

The film was not what I’d expected, based on the idea of the Nigerian Prince email scam I was expecting something a little light and humorous, but actually what we get is an often dark look at the criminality behind such scams, organised criminals, abuse from public office and people in all kinds of roles prepared to take money to turn a blind eye.

Not sure how this has gone down in Nigeria, as it doesn’t reflect well on their society or way of life, but as an outsider it gives a disturbing glance at an economy that is still built on just as much bribery as legitimate business.

The performances especially from the two male leads Bell and Uche are solid and even if the film feels a little ill disciplined, with numerous shifts in story focus it still made for and intriguing and enjoyable watch.