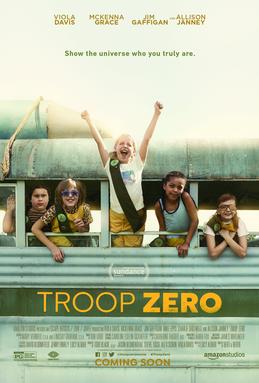 There is a lot to be said about the idea that the end of a film dictates your view of it and Troop Zero is a good example of that, because it wasn’t until right to the end that I realised I’d enjoyed it!

Set in 1977 Georgia, the film focuses on the story of Christmas Flint (played by the excellent talent that is Mackenna Grace) a young girl who is coming to the terms with losing her mother as well as being one of her schools unpopular kids, she copes with this by immersing herself in a fascination with space. Her life is changed when she learns of a NASA competition to have the words of children included on a disk to be sent to space and played out into the galaxy, however to be included she needed to be part of the winning Birdie Troop at the local Birdie Scout Jamboree, but of course she is not a Birdie Scout.

Her answer is to put together a troop made up of other kids out on the periphery of the school social ladder, which leads us to the usual story of a group of misfits trying to get together to pursue a dream against the odds and of course up against the popular kids!

What I enjoyed about Troop Zero and what its end did, was that throughout it plays a little with this common movie trope and retains a quirky nature, never been quite the sweet success story you expect, none more than Viola Davis’s Miss Rayleen who is never quite the positive cheerleader that you expect and the troop never quite achieve the things they aim for.

What I enjoyed about it most though was that it stuck true to its quirky nature right up to the end and didn’t cop out. While it’s a relatively well trodden story path, Troop Zero does it with a quirky good nature and successfully plays around with the expected twists and turns for this kind of story. I doubt it will change anyone’s life, but it’s certainly an enjoyable diversion.