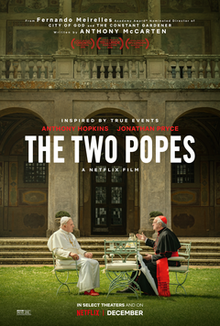 Another in a growing collection of Netflix’s critically acclaimed films The Two Popes give us not one but two oscar nominated performances.

Anthony Hopkins and Jonathan Pryce star as Pope emeritus Benedict and current Pope, Francis, in a fictional account of a meeting between the two men in Rome ahead of Benedict’s decision to resign, the first Pope to do so in nearly 800 years.

What has the potential to be a dry piece of modern history is anything but and is more a portrayal of two men both racked with doubts, regrets and questions of self worth, what it gives us is a surprisingly humorous, warm story which is at its best during the scenes between the two, often sparky, often humorous, often warm and tender.

The film occasionally drifts in the final act as it looks back at Bergoglios regrets during his early life in Argentina, however it’s an important part of the story, but does take us away from the more engaging world of Hopkins and Pryce.

It is a really enjoyably told story, built around two fantastic central performances, it’s not really a story about them as religious figures, but about the development of a warm friendship and it’s a pleasure to spend time with them as it develops.